How to Make Your Own Rose Hips
By: Michael Brooks

I was enjoying a long (very long) hike over the weekend that brought me in contact with a wide variety of plants and animals.  While taking a breather at a ranger station, I was admiring a plant which had what looked to be cherry tomatoes or some kind of red berry sprouting from its branches.  The ranger said I was looking at a rose bush and the red fruit it was producing went by the name of rose hips.

“Rose Hips” I shrieked.  I had known of the supplement for years but had never seen a real live rose hip.   I was informed that rose hips form after the rose bloom has died.  Almost any rose variety will produce hips but the ranger informed me that the Rosa rugosa formed the tastiest variety if you planned on eating them.  Further research confirmed that Rosa rugosa is the bush of choice for tasty rose hips.

Why Eat Rose Hips?
Probably the best reason to eat or drink rose hips is the incredible source of vitamin C that it provides. Studies have shown vitamin C to be helpful with fighting infection, colds/flu, sore throat, fatigue and stress to name a few.  Hips provide almost 20 times the amount of vitamin C found in Oranges.

How do I Grow Rose Hips?
As I have mentioned, there seams to be a consensus that Rosa rugosa is the best plant to use for growing rose hips.  Let the blooms die on the bush (resist the temptation to cut the beautiful blooms, the more you cut the less hips you will produce) and the hips will begin to form.  They will start out green and begin to turn red similar to the way a tomato ripens.  Harvest them when they become completely red but not overripe, this usually occurs after the first frost.

Preparing the Hips
You can use rose hips either fresh off the vine, dried, or preserved.  To dry the fruit spread the hips out on a clean surface.  Allow them to dry until the skin begins to feel dry and slightly shriveled.  At this point, split the hips in half and take out all of the seeds and tiny hairs in the center.  Remember not to use aluminum pans or utensils as this will destroy some of the vitamin C.

After the seeds are removed you can let the hips dry completely.  Don’t wait to remove the seeds until hips are completely dry or you will have trouble with de-seeding.

Store the dried hips in sealed plastic bags.  Freeze for long term use or put in the refrigerator if you plan on using over a two or three month period.  Hips can be eaten as a semi-sweet snack at anytime.  You can also make tea and preserves; I have listed two recipes below to get you started.

What about Supplements?
Rose hip supplements are available at most health food and vitamin stores.  For me, the fun is in making your own hips.  If you just want vitamin C there isn’t really a whole lot of difference between taking regular vitamin C supplement and vitamin C with rose hips (except the price, hips will cost a bit more).

Recipes
If you are fortunate enough to have roses at your home, here are some recipes you might want to try:

Author Bio
Mike Brooks has been a life long follower and proponent of the fitness lifestyle.  Through his avid research, Mr. Brooks has come to the realization that being healthy is a choice and encompasses not only proper diet but also a fitness regimen that includes the mind, body and soul.  Mike Brooks is the publisher and editor-in-chief for the health information site http://www.Ultimatehealthreport.com

I got an email about a new book – The Romance of Farming – with little information except the title. Many think of the romance and forget the reality. This leads to disappointment when the two don’t meet. Being prepared for both is the marriage that makes a life. Not having both can make for a nasty ‘divorce.’

I think of the romance as the pleasant things. This is youngsters running on pasture, abundant harvests from the garden, sunsets over the back deck. These are the things that make living in the country worthwhile as well as BBQ dinners with friends, room for family to get together and less restriction with gatherings.

Then there’s the reality. There’s finding animals dead after a storm, or a birthing gone wrong, or beetles chewing on your plants. These things make it difficult to see the romance. Raising a lamb to be a productive and promising member of the flock then losing her isn’t fun. Sitting in a puddle by a fence trying to fish out a nose or feet isn’t glamorous.

Then there’s another good moment. The new pullets turned out or young rabbit doing well at a show or eating salsa produced in your garden and processed in your kitchen. It takes the sting from the down times. The balance is important. 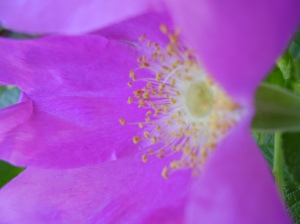